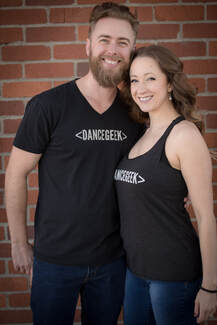 Ben McHenry and Cameo Cross came together just over 6 years ago with the goal of simply creating a routine for one  night. One hour working on choreography and a 2nd place in Classic the next night was just the beginning of what has become one of the top WCS partnerships in the world.
Ben started dancing WCS at 11 years old, and he very quickly fell in love with the dance. At 16, he had already competed and placed in the Champions division. Now at age 31, he has been teaching for 15 years. Known for his extremely outgoing personality, and his love for social dancing in WCS, he continues to bring joy into WCS dancers lives everywhere across the world.
Cameo started dancing almost immediately after birth. Daughter of Michael and Amber Cross (The 1st US Open Swing Dance Champions ever), she was exposed to WCS immediately. Dance has always been her life. However, at 10 years old, her focus shifted to classical ballet, which took her to great heights going through the University of Arizona’s School of Dance, and then on to dancing with River North Dance Chicago in Chicago, IL. In Chicago, things came full circle as she found her way back into WCS. Now at age 32, Cameo brings a wealth of knowledge and experience not only related to WCS, but dancing as a whole that is a unique and invaluable resource within our community. In 2018, Cameo also won a Northern California Regional Emmy Award for her work on Baseballet 2: Into The Game.
Ben and Cameo (BAMEO), now based in the San Francisco Bay Area, have both been inducted into the California Swing Dance Hall of Fame. From California, they have now traveled all over the United States, and all over the world including countries such as France, Germany, Ukraine, Russia, UK, South Korea, Australia, New Zealand, with many more on the horizon. Together, they have made 8 US Open Classic Division finals and placed top 3 in multiple NASDE Classic Divisions including two 3rd place finishes and a 4th at US Open Swing Dance Championships, 3rd at Seattle Easter Swing, 2nd at Swingtime in the Rockies, 1st at MadJAM and are the 2018 and 2019 UCWDC Worlds Showtime Cabaret Champions. Separately, they have consistently placed/won in Jack & Jill and Strictly Swing divisions at competitions all over including Swingdiego, US Open Swing Dance Championships, Capital President’s Day Weekend, Boogie by the Bay, and many others. Together, they combine knowledge from many components of dancing in general, movement/body mechanics, and WCS specifically. They are known for focusing on many of the most complicated concepts in WCS, and finding ways to simplify them, making them easier to understand and apply for WCS dancers of all experience levels. Their goal is to spread their love and passion for WCS to dancers all over the world, and they look forward to many of years of doing just that. 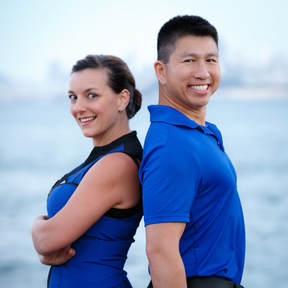 Joanna Meinl has a unique and diverse dance history, beginning her formal training in 1990 with ballet, jazz & hip-hop, and then studying modern, classical Indian and dances of the African diaspora in college. She holds a B.A. in Dance Performance/Choreography & Dance Ethnology and has been dancing professionally since 1998. In 2005 after becoming a Ballroom & Latin dance instructor, Joanna discovered West Coast Swing. She soon became immersed and has been a swing addict ever since! She has won many competitions including placing top 5 at the US Open Swing Dance Championships in All-Star Jack & Jill, Open Strictly Swing, Sophisticated Swing and Cabaret. Joanna has 20 years of teaching experience and incorporates both her technical training as well as her practical social dance experience into her dynamic style. She calls the Bay Area, CA home, but travels extensively, teaching, performing, judging, competing and sharing her love of dance!
Edwin & Joanna have been friends for many years, but started their dance partnership just three years ago. They recently won 1st place at the US Open in Sophisticated Swing, 2018. They enjoy working together on their artistry and sharing their joy of dance! 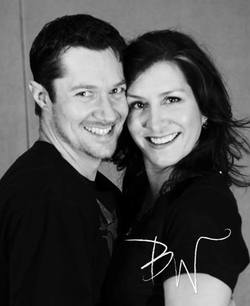 Yvonne has been dancing for over 20 years, and teaching for 18. She has an extensive background in Ballroom, Country, Swing, Latin and even Line dancing. She has owned 2 dance studios over the years and has had much success in Professional and Professional/Amateur competitions. In addition to being the first Professional Country Dance World Champion she has coached many students titles of their own. She is actively competing in Champions division on The World Swing Dance and NASDE circuits, she continues to finish in the top 5 with recent placements at Fresno, South Bay and Mountain Magic dance competitions in 2013. She is the Dean of West Coast Swing University and continues to teach all over the U.S., Canada and Europe. Her love of dancing is spreading to the next generation by teaching at Middle and High Schools around California and creating and teaching cotillion and dance etiquette classes. She is also the director of the Northern California Swing Dance Challenge, a unique event that brings together bay area instructors and their students to give competition a try in a friendly and supportive environment. Her goal is to work together with all to share the love of dance.

Jason has also been dancing for over 20 years and has been instructing for 12. He began dancing in 1990 during the country craze. He focused primarily on Country until he discovered his undoubted passion for West Coast Swing, which has been his life ever since. He is currently competing at the Champion Level in West Coast Swing on the National Circuit. He has many recent wins including Champions Jack & Jill at Boogie by the Bay 2010, South Bay Dance Fling 2011 and Fresno Dance Classic 2013. He teaches two forms of dance primarily, West Coast Swing and Lindy Hop Swing, and also teaches Salsa and Ballroom. His very unique style and presence make him sought after all over the U.S. and Europe. Professor Wayne is a very dedicated instructor who leads his students into mind opening experiences by teaching his own version of lead follow and movement. Many students have claimed Jason’s teaching has lead them to a completely new understanding of dance and movement. In addition to teaching adults he also loves teaching kids and is currently teaching PE curriculum programs for schools around the San Francisco Bay area.

See Jason & Yvonne Dance!
* PRIVATE LESSONS ARE AVAILABLE THROUGHOUT THE DAY WITH ALL OUR PROS!
PLEASE CONTACT THEM DIRECTLY FOR DETAILS & SCHEDULING.